It’s not a real knife, but it can cut away tumors

An outpatient procedure, it won’t work for all cancers 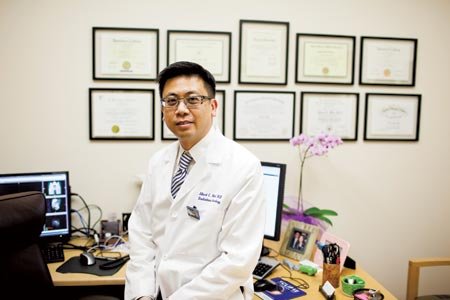 A relatively unknown treatment for tumors could be a boon for many African American cancer patients. The treatment—a radiation procedure for both benign and malignant tumors called CyberKnife—is painless and can be done on an outpatient basis requiring little or no down time or recovery time.

“We call it radiosurgery in the sense that a large dose of radiation is delivered to the tumor in one to five days,” said Albert C. Mak, M.D., director of the Pasadena CyberKnife Center. “This is in contrast to the standard conventional radiation, in which you get treatment for six to eight weeks. In order to deliver the surgery the treatment has to be very precise.”

Mak describes the CyberKnife procedure as “basically a radiation machine controlled by a robot. We also call that robotic radiosurgery. What the robot does is manipulate the machine from different 300 to 400 possible angles. That allows us to have a lot of flexibility to target the tumor.

For prostate cancer, Mak said the treatment consists of four to five days of radiation.

Willis Jordan, an African American patient who underwent the procedure for prostate cancer a year ago, agreed that his treatment “went very smoothly” and was painless.

“I went for five days straight, and each session was about one hour,” he said. “There was no pain. The only thing that was uncomfortable to me was—and I don’t know if you could really consider it a discomfort—I had to take a strong laxative each night and an enema each morning before treatment.”

Also, Jordan said, during the five days it made his appetite a little irregular. Although he had the operation during his summer vacation, Jordan said he could have worked, even though he had some trouble urinating. To treat that, he said, he was put on a prescription drug that helped alleviate the problem.

CyberKnife, a linear accelerator-based therapy, is just one form of radiosurgery; there are at least two other types.

Mak pointed out that there are some restrictions to CyberKnife surgery. “The tumor has to be relatively well defined,” he said. “If the tumor is too extensive, we cannot do it. It has to be well-defined and confined to an area.”