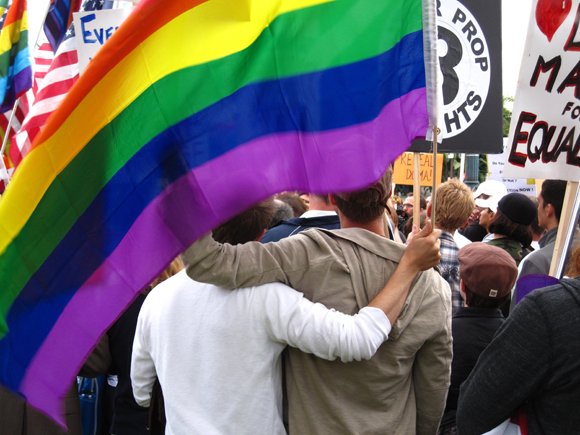 A group of protesters gathered outside President Barack Obama's fundraising event in Beverly Hills on May 27, 2010 asking him to overturn the military's Don't Ask, Don't Tell policy. Michael Cary

Those trying to reinstitute Proposition 8 — the voter-backed referendum to ban gay marriage in California — lost once again in court on Wednesday, meaning no stop to such legal unions that resumed a few weeks ago.

One was brought by ProtectMarriage.com, the group that’s led legal efforts defending what’s known as Prop 8, and the other came from a San Diego County clerk who’d argued the state had put him in an “untenable position” by compelling him to sign off on marriage licenses for gay and lesbian couples.

The rulings were the latest in a spate of decisions — at the state and federal level, including the U.S. Supreme Court — that have gone against those trying to restrict marriage in the Golden State to between one man and one woman.

Attorney General Kamala Harris was among those gay marriage supporters who cheered Wednesday’s ruling, much as they have the others in recent months. She tweeted: “The CA Supreme court has denied the #Prop8 proponents’ request to halt same-sex marriages!”

Those on the other side of the debate, meanwhile, lamented Wednesday’s ruling and more generally criticized state leaders who, in their view, had “silenced more than 7 million Californians who clearly expressed their views.”

“Though the current California officials are unwilling to support the state constitution, we remain hopeful that one day Californians will elect officials who will,” Alliance Defending Freedom, a legal advocacy organization, said in a statement. “...The court’s decision today ... does not end the debate about marriage in California.”

In May 2008, California’s Supreme Court struck down the state’s ban on same-sex marriage, ruling that the state’s constitution gives “this basic civil right to (marry to) all Californians, whether gay or heterosexual, and to same-sex couples as well as to opposite-sex couples.”

The tide turned a few months later, when 52% of voters backed Proposition 8 to halt gay and lesbian marriages.

Yet state officials declined to stand behind the prohibition, even if private parties did. A federal appeals court subsequently ruled that Proposition 8 was unconstitutional, though it still issued a stay on same-sex marriages until the U.S. Supreme Court could weigh in.

That happened June 26, when the nation’s high court — in a 5-4 decision — dismissed an appeal of the earlier lower court ruling on narrow, jurisdictional grounds.

Proposition 8 backers tried to get the U.S. Supreme Court to again intervene, but Justice Anthony Kennedy refused to do so.

Efforts continued, though, in the state court system.

One came from San Diego County Clerk Ernest Dronenburg, who last month asked the California Supreme Court to order Gov. Jerry Brown, Harris and other state officials to abide by an “immediate temporary stay” to once again halt same-sex marriages.

Dronenburg argued that he had been “threatened with legal action by the attorney general for exercising his public duties consistent with state law defining marriage as the union between one man and one woman.”