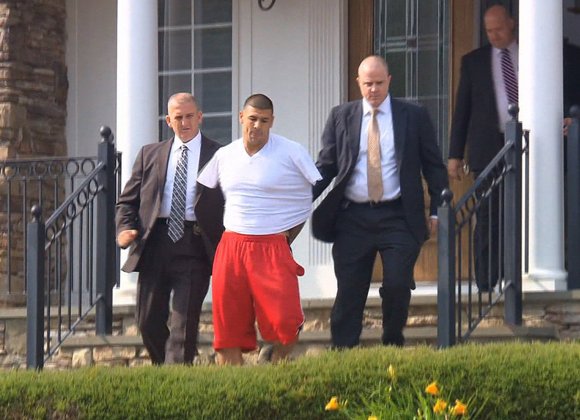 New England Patriots tight end Aaron Hernandez was handcuffed Wednesday morning and put into a police cruiser outside his home in North Attleborough, Massachusetts. The nature of his being taken into custody remained unclear. He is likely to be transported to the police department, where he will be told what charges he faces, if any. Authorities have been tight-lipped since 27-year-old Odin Lloyd’s body was found.

Hernandez has pleaded not guilty to murder in Lloyd’s death.

Another friend, Carlos Ortiz, 27, told investigators that he observed the former New England Patriots tight end putting firearms into a box in the basement of his North Attleborough, Massachusetts, home, including a small handgun that Hernandez had asked Ortiz to retrieve from the floor of the car they were driving. Ortiz then bought it into Hernandez’s home, according to the document.

Ortiz stated that he also had seen Hernandez enter the home and walk into the basement carrying a large handgun earlier in the day. This is consistent with a statement made by a prosecutor in court in late June.

“The defendant goes walking through the house with the gun in his hand. That is captured in the video. ... And they all go down to the basement,” said Bill McCauley, first assistant district attorney for Bristol County, Massachusetts. “Once in the basement, the surveillance gets shut off.”

Authorities have said Hernandez, Ortiz, and Ernest Wallace, 41, picked Lloyd up from his Boston apartment early on June 17. Surveillance cameras showed the car at an industrial park near Hernandez’s North Attleborough, Massachusetts, home.

The documents also reveal the involvement of Tanya Singleton, 38, a cousin of Hernandez.

After leaving Massachusetts, Wallace dropped Ortiz off at Singleton’s Bristol, Connecticut, residence. Ortiz told authorities that he spoke with Singleton about Lloyd’s killing.

Singleton lives near a lake in Bristol where a state police dive team was searching for an item linked to Hernandez’s case.

According to the documents, Singleton also allegedly assisted Wallace in fleeing authorities. She has not been arrested or charged.

Authorities collected Singleton’s credit cards and cell phone. According to the search warrant, Singleton allegedly purchased a bus ticket for Wallace to travel from Macon, Georgia, to Miami. Authorities arrested Wallace in Miramar, Florida, on June 28. It is unclear how Wallace traveled from Bristol to Macon.

Wallace also regularly used a cell phone paid for by Singleton, according to the documents.

Authorities have accused Hernandez, 23, of orchestrating the death of Lloyd, the 27-year-old boyfriend of Hernandez’s fiancée’s sister.

Lloyd’s body was found in an industrial park near Hernandez’s home on June 17. The police believe Lloyd was shot execution style with a Glock .45. The weapon has not yet been found.