Local police suggest he could have done more 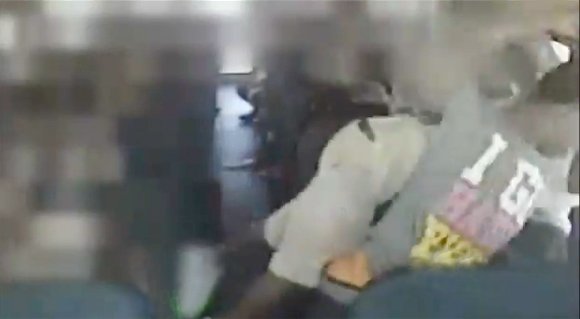 GULFPORT, Fla. — The windmilling fists and stomping feet rain down blows on the 13-year-old boy.

Trapped on the floor between the bus seats, he cries out as he receives fierce punch after vicious kick from the three bigger, older youths.

As the relentless assault unfolds, the driver of the Florida school bus alerts the dispatcher, pleading for aid.

But he doesn’t physically step in to help.

The bus driver, at least according to his school’s policy, did nothing wrong.

‘Get somebody here quick’

The attack took place July 9 in Pinellas County, Florida. But the horrific cell phone video — and the surveillance video — came out only recently.

As the boy is pummeled, the bus driver John Moody yells at the assailants to leave the boy alone.

“Please get somebody here quick. There’s still doing it,” he adds. “There’s nothing I can do.”

“The three boys just jumped on him and started pounding on him. And I did all can,” he told CNN affiliate WFLA. “I was looking. It was like I was in shock. I was petrified.”

Not required to intervene

The ferocity of the attack left the 13-year-old with two black eyes and a broken arm.

“There was clearly an opportunity for him to intervene and or check on the welfare of the children or the child in this case and he didn’t make any effort to do so,” Chief Robert Vincent of Gulfport Police Department told the affiliate.

According to Pinellas County school policy, the bus driver isn’t required to intervene, only to call dispatch.

He can step in, if he feels it’s safe.

No basis for charges

Prosecutors say they have no grounds on which to charge him.

“It wasn’t like he was looking out the window cleaning his fingernails or something like that,” said Chief Assistant State Attorney Bruce Bartlett, according to CNN affiliate WFLA.

Police said Moody could have given first aid to the victim after the attackers jumped off the bus.

But Bartlett said the 13-year-old didn’t hang around.

“The kid gets up and skedaddles out the door,” he said.

‘I wanted to help him’

The three 15-year-old boys have been arrested on aggravated assault charges.

Police say the youths attacked the 13-year-old after he told officials at their dropout prevention school that one of them had tried to sell him drugs.

Moody, who retired two weeks after the attack, says he’s still haunted by it and has had sleepless nights.