Palmdale Airport plans still up in the air

But the city has regained control from Los Angeles World Airports 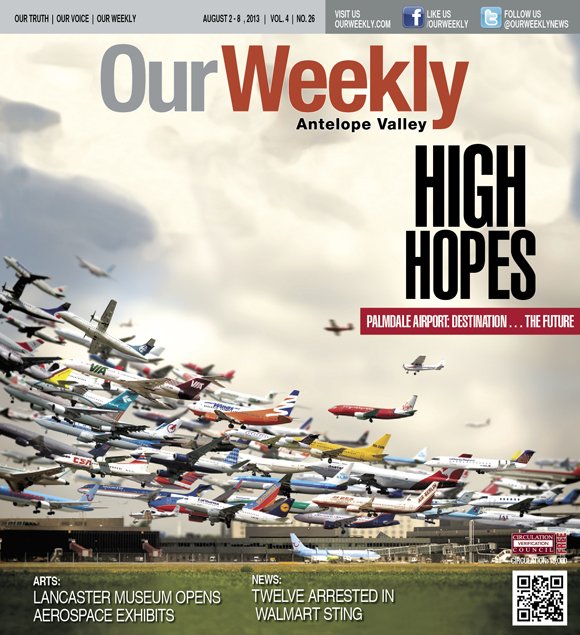 Plans are still being debated about the future of Palmdale Airport after the city finally took control of the facility last month from Los Angeles World Airports (LAWA). Right now, Palmdale officials are working out the final details with Edwards Air Force Base in the effort to pursue air carriers and resume commercial flights out of the Antelope Valley. Edwards is primary user of the facility.

Passenger service was canceled at the facility in late 2008. Near the airport’s closing, only one in three seats, roughly 22 of 66 seats, was occupied on a typical commuter flight. At that point, United Express had attempted twice-daily flights to San Francisco using Skywest Airlines turboprops, but that 18-month effort ended because of a lack of demand for air service. Also, Palmdale Airport was one of the 200-plus air traffic control towers nationwide scheduled for closure as part of 2012 cost-cutting measures by the Federal Aviation Administration (FAA).

In March, the Palmdale City Council voted to take on key oversight portions of the airport from LAWA, the Los Angeles airport authority, which has operated the facility since 1967. Now, Palmdale will operate the terminal building, a parking lot and a taxiway. LAWA still owns more than 17,000 acres of airport land adjacent to the dry lake bed made famous by the many space shuttle landings as well as historic military test flights.

“There’s no payment involved,” said Palmdale Mayor Jim Ledford. “This is merely to take control of an airport that exists in our community today that has no passenger service. We anticipate that will change. We want to be part of a viable regional airport system in Southern California.”

Eventually, Ledford explained, the airport will benefit from the proposed high-speed rail service from the Central Valley, through the area and onto Las Vegas. He said local train service operated through Metrolink could play a role in the airport’s future. “The dream is an international facility unlike anything in America,” Ledford continued. “We are in a community that wants an airport; we will be able to handle quite a lot of demand.”

Originally, LAWA and Palmdale wanted to attract an airline to provide multiple daily regional jet departures to a large hub in the Western United States. This service would have provided travelers with a wide range of connecting flights to major business and leisure destinations throughout the country and the world. It’s still possible with the new owner, but with the LAX master plan under way designed to accommodate 4,500 passengers per hour, Palmdale will be challenged to justify operations in a region that appears to be overshadowed by busier flight hubs such as LAX, Van Nuys, Santa Monica and Ontario airports.

By combining the existing 5,800 acres of the current airport with the 17,500 acres of undeveloped land for the future facility, Palmdale Airport could become one of the largest civilian airports in the world. The two main runways are each more than two miles long and have been used traditionally by the Air Force as well as United States military allies. At the time of its closing, 80 percent of airport operations were used by the military, 16 percent by general aviation, 2 percent by commercial flights and another 2 percent by air taxi service.

In 2007, Palmdale received up to $6.6 million in subsidies to restore commercial service, including a $900,000 federal grant, all intended for new development that would, hopefully, attract new carriers. At the end of 2008, the airport saw a regular increase in passenger traffic; the FAA reported that boarding was up to 10,392 passengers compared with 5,712 travelers in 2007. LAWA found it had to relinquish operations because the airport could not provide the range of destinations that would make passengers select it over LAX, Van Nuys or Bob Hope Airport in Burbank.

Communities around those airports did not want the noise and congestion of additional flights, while most Antelope Valley residents reportedly support expanding services at Palmdale.

Today, most of the airport serves as a manufacturing plant for aircraft used by the military. The small terminal, opened in 1971, is located at the sourthwest corner. Built in 1940, the airport was originally operated by the government primarily as an emergency landing strip. Los Angeles County took over operations in 1946 and, by 1950, the U.S. government again took control and began construction of the famous Plant 42, which produced the legendary Lockheed SR71 Blackbird reconnaissance plane.

From 1970 through the mid-’80s, LAWA operated the facility with dreams of converting it into an alternative to LAX. That never came to fruition, but the terminal was remodeled in 2007 and that was when Palmdale presented its own plan to assume operations. At that time, there was also talk of using the undeveloped land for energy exploration and production.

Palmdale Airport offers a unique look into aviation history with its Joe Davies Heritage Airpark at Plant 42. This is the annex of the Air Force Flight Test Center at Edwards Air Force Base, and included in the collection of planes housed there are the aforementioned SR71 Blackbird, built during the Cold War, as well as its predecessor, the A12 test plane and, up until now, the super-secret D21 drone.

The recently completed Blackbird Heritage Wall commemorates the designers, crew members and others associated with the famous aircraft. The museum and gift shop are open from 10 a.m. to 5 p.m. Friday through Sunday. Davies is a past commander of Plant 42 and a former Palmdale city councilmember.

Opened in 2002, the Airpark also displays more than two dozen restored aircraft, including a B-52 Stratofortress bomber, a C-140 transport, an F-14 fighter jet and even a one-eighth-scale model of the B2 stealth bomber. Many retired aerospace workers from the Antelope Valley serve as docents and volunteers. The famous Plant 42 is still home to Boeing, Lockheed-Martin, Northrup-Grumman and a few other classified aerospace firms.

Many of today’s newest military jets are produced in Palmdale, such as the F-22 Nighthawk, the F-35 Lightning II, the B-2 Spirit and the Global Hawk unmanned aircraft. The F-16 has been in the news recently because President Barack Obama has delayed delivery of four new fighters to Egypt because of continual political unrest.

Edwards Air Force Base is one of the world’s most famous military installations. It was named in honor of Capt. Glen Walter Edwards, who flew 50 missions in the A-20 Havoc light attack bombers during the North Africa campaign in early months of World War II. The plane, built locally, was unique in that it could fly much lower than conventional Air Force air craft against enemy tanks, convoys and troop concentrations.

Edwards became a test pilot in 1943, spending much of his time flying over Muroc Army Air Field (now Edwards), testing a wide variety of experimental prototype aircraft until his death in 1948 while testing a Northrop YB-49 Flying Wing. Muroc was first used by the military in 1933 when a small advance party from March Field in Riverside came to design and maintain a bombing range for the Army Air Corps. Four years later, the entire Air Corps was performing bombing and gunnery maneuvers here.

The base has played a significant role in the development of just about every aircraft to enter the Air Force inventory since World War II. Practically all military aircraft from past to present have been at least partially tested at Edwards. Gen. Chuck Yeager broke the sound barrier here on Oct. 14, 1947, when he reached Mach 1 (800 mph) in the Bell X-1 designed by Bell Aircraft Co.

The flight wasn’t supposed to make the news, but the results were leaked to a reporter from Aviation Week magazine, and, shortly afterwards, the Los Angeles Times would also run the historic story. The Air Force threatened legal action against the two publications, but none was taken.

Edwards Air Force Base lies adjacent to Rogers Dry Lake, an endorheic desert salt pan (basically a drainage basin that does not flow to the ocean) whose hard dry lake surface provides a natural extension to the runways. A National Historic Landmark, Rogers Dry Lake measures 65 square miles and is shaped, roughly, like a lopsided figure-eight spanning 13 miles long and five miles wide. It is a pluvial lake (once filled with water during the last glacier) formed during the late Pleistocene Era about 2.5 million years ago. The lake is dry for most of the year except for brief occasions when rainfall can fill the lake bottom measuring just a few inches of water.

Also based at Edwards is the Air Force 412th Test Wing that plans, conducts, analyzes and reports on all flight and ground testing of aircraft, weapons systems and military software. Within the test wing are a number of Global Power test squadrons composed of fighters and bombers, Global Reach transport squadrons, the Global Vigilance (unmanned) test squadron and the U.S Air Force Test Pilot School where the top men and women with the “right stuff” learn to become combat pilots, navigators and engineers.

Also, the NASA Dryden Flight Research Center, opened in 1946, remains home to the world’s most advanced aircraft while supporting the space agency’s earth science research with a fleet of specialized manned and unmanned environmental science aircraft. In May, the X-38 experimental research vehicle, built to help develop technology for an emergency Crew Return Vehicle from the International Space Station, landed successfully at Edwards.

The space shuttle landings brought Edwards into homes around the world. In 1972, NASA and Rockwell International selected the base for orbiter testing with the prototype “Enterprise” becoming the first of 13 test flights conducted here. After the Columbia became the first shuttle launched into orbit on April 12, 1981, it returned to Edwards for landing. This was because the air base’s immense lake beds and its proximity to Plant 42—where the shuttle was serviced before relaunch—were important factors in its selection and its continual service as the primary landing area for the shuttle until 1991. NASA then opted for the Kennedy Space Center in Florida for landings because it became too expensive to regularly transport the orbiter 3,000 miles via “piggy back” on the customized Boeing 747. All space shuttles were designed at Rockwell’s Systems plant in Downey and assembled at its Palmdale facility. The last shuttle to land at Edwards was STS-128 (“Discovery”) on Sept. 11, 2009.